It’s Just a Thought, But it’s Not So Easy to Change. 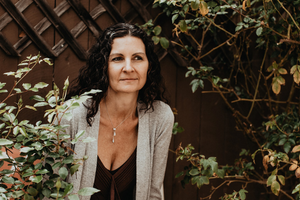 Stopping the negative thoughts and negative self talk isn’t possible through sheer willpower alone. You know, because you’ve tried.

Let me ask you this, does it feel like all the unhelpful stories, thoughts, and dire “what if” scenarios are ruling your life? Are you believing the harsh dialogue and negative thoughts your mind is feeding you?

Listening to these thoughts can take a toll on your confidence and self-worth until they’re practically non-existent.

And the popular saying, “It’s just a thought and a thought can be changed,” isn’t a perfect fix.

I tried for years to change my thoughts.

I attempted to align to more helpful thoughts and positive self talk through things like affirmations, mindset work, and replacing negative self talk with more productive messages.

It frustrated me to no end, because I felt like no matter how hard I tried, the negative voice only kept getting louder and louder.

Rationally, I knew that my mind wasn’t delivering accurate or true messages, but none of the positive things I was trying to tell myself could penetrate it.

My consistent efforts to retrain my brain weren’t working. It ended up making me feel more flawed.

In order to turn down the noise, I had to get to the root of it.

I’d worked hard for years to make my way to the top of my career. But still, issues of self-worth kept gnawing away at me.

It was actually when I reached the PEAK of success (in the eyes of others and from a career standpoint) that I started to feel the full impact of low self-worth. That level of success began triggering everything I’d been carrying inside.

Even though I’d managed more than one multi-million dollar organization, I still grappled with painful waves of self-doubt and not feeling good enough.

I over compensated, second-guessed myself, and spent a lot of time over thinking EVERYTHING.

I didn’t realize it was all a result of low self-worth. I had unhealed wounds I was carrying around inside that were resulting in repeating negative thought patterns.

The affirmations and positive self-talk were aimed at the conscious level of my brain, but what was going on was deeper, in the unconscious.

Thoughts determine what you do, and they have the power to change the way you feel.

And here’s the kicker… according to research conducted by the National Science Foundation, around 80% of our thoughts every day are negative ones.

I know that on really rough days that probably feels a bit more like 100% at times because the voice in your head is full of negativity and drama. But you are not that voice.

What Do You Do Then?

It’s true. You are not the voice in your head. You’re not even the thoughts.

Next time you’re stuck in your head listening to the noise, check in on the negative thoughts and remind yourself that you are the one who is observing the thoughts. Checking in and being the observer of your thoughts is an important key to release.

When you’re the observer, you can step aside and actually get curious about what your negative chatter has been telling you.

You can question the intel.

When clients begin working with me, they’ve let the harsh, negative inner dialogue tear them down.

When they learn how to step outside the voice and practice being the observer, it helps them see the negative thoughts differently, even accept that they are there. It’s from this place that the thoughts can be questioned and even refuted.

1. recognize that you’re having a negative thought,

2. accept that you have those thoughts, and

3. question the validity of the thoughts you realize, “I’m not the thoughts in my head. I can detach from them.”

This isn’t about ignoring your truth and turning everything into an over-the-top, toxic positivity, motivational speech.

It’s about understanding and paying attention to when the negative thoughts roll through – and knowing you can choose how to react to them and what you choose to believe.

When you begin to heal the deep parts of yourself that formed the beliefs, perceptions, opinions, etc., it’s easier to turn down the negative running commentary in your head and calm the mental gymnastics. Recognizing you are the observer is a beautiful place to start.

Manage Cookie Consent
We use cookies to optimize our website and our service. By scrolling to view the site, you are accepting the use of cookies. You can decline consent on the Cookie Policy page at any time.
Manage options Manage services Manage vendors Read more about these purposes
Preferences
{title} {title} {title}